Kids had many chores to do in the New World. Kids collected stones from the fields to make stone fences. They collected berries. They helped with the farm animals and the harvest. They helped their mother make candles. They helped to make clothes. Everyone had to pitch in.

Kids in the New England and Middle Colonies especially spent a great deal of time in church or in prayer. Sermons were long. Sometimes kids fell asleep. If they did, in some churches they were poked with a long pole with a brass knob on it, to wake them up.

Kids went to school. They often had homework, sometimes lots of it. Yet, they still found time to play.

In winter, in the Middle Colonies, kids had fun skating. In all the colonies, kids played with balls and bats and marbles and dolls. They played tag. In the south they played lawn bowling. In the north, they played shuffleboard. There were dances and parties. For some, it was a big deal to go into town. For others, it was fun to visit a country fairs and eat candies and watch puppet shows. Kids did not have a lot of free time, but with the free time they had, they had fun!

Children in Colonial times used natural materials to make toys and decorations. Kids were creative, and so were their parents. They used what they had.

Colonial Children's Games - how to make a whirligig and clothing cutouts

Making Colonial Toys - games to play and toys to make

Go here to learn how to make a corn husk doll 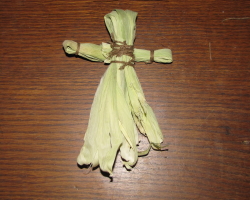 Try the Goose Game online, interactive (not a flash game)

How to make marbles like Colonial kids did with salt, water, and corn starch

The New England Colonies for Kids

The Middle Colonies for Kids

The Southern Colonies for Kids

Free Use Lesson Plans and Classroom Activities for Colonial America

Free Use Presentations in PowerPoint format about Colonial America

Free Use Clipart for the 13 colonies

For Kids and Teachers

Brink of the Storm and the Civil War

Growth in the West

World War I, The Great War

Free for Classroom Use - American History Powerpoints and Presentations